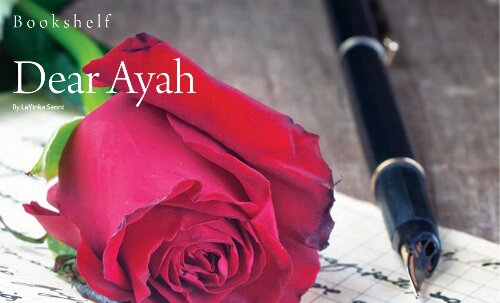 I’ve stopped signing my name now. 48 years since my first one, I’ve realised that each letter is merely a continuation of the previous – a never ending reel of my ruminations.

I can still remember my very first time. My hands were shaking ever so slightly, a minor tremor as I picked up the fountain pen I’d inherited from my mother, who’d inherited it from hers; a bloodline of wordsmiths who came alive through the pen’s nib. The texture of the fine paper betrayed the curves in my cursive, and blots of ink shot onto the sheet. A ragged sigh escaped my chest, on the brink of spilling over a river of my yearning to write to her.

‘Dear Ayah‘, it began. A sign. She was a sign of all things beautiful – she captured them with her eyes, cast them into her heart, and left a trail of beauty wherever she went. Ayah. I often wondered what sign it was her parents had seen that led them to that name when she emerged into the world. I can imagine she’d brightened the room that day, just as she lit my heart with life after a decade of suffocating darkness.

‘I’m writing this letter to declare…‘ to make what I already knew to be true, truer. My heart gripped its cage and rattled against the bars that kept it hostage. How could I express myself without giving my entire being at once? Would she think any less of me – strip me of my masculinity? Men write, yes, but do they write to profess and confess their overwhelming love for their soul’s sole companion?

We laughed about it one day. She stroked my hands as she lay riddled with pain. Her eyes shone, and told me there was nothing more manly than a man who opens his heart wide for his lover to see. I couldn’t cry. Couldn’t let tears dampen my thick stubble of a beard that she loved to run her fingers through. It must be kept dry for her to entangle her fingers in for the very last time.

That day I could see her last breaths – her body shuddered with each scratchy intake of air into her thin rib cages. The cancer had tore through her and knocked her down cell by cell. The morphine cascaded through her to no avail. Her pain was beyond the threshold that induced tears; her organs had cried for so long they’d become numb to their own wailing. I swear I could almost hear it.

It was her index finger and thumb that eventually slacked from their limp hold of my hands. Hands that had been intertwined with hers for what felt like an eternity, and what I wish would have been an eternity evermore. She slipped away silently, and I didn’t need to look up to know my better half was journeying to a place less cruel than the cancer-ridden body she had been trapped in for so many years.

That was 10 years ago, and as the sun dips to tuck away snugly beneath the horizon, fresh sheets embrace my cursive as I pen her another letter.

‘Dear Ayah, I’m writing to declare that soon I too may be free from the prison of this body, so that my soul can once again feel at ease in the company of its mate.’

I declare what I feel to be true, in the truest way I know. And while I wait for my fate to come to pass, my pen dips and curves in letters for my greatest sign of love. Dear Ayah, forever more.

This story was published in the September 2013 issue of SISTERS.