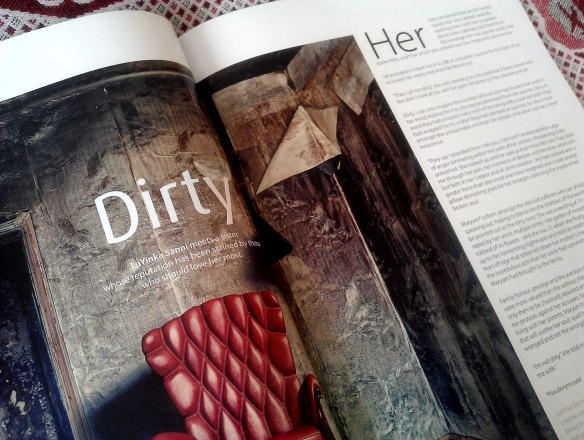 Her eyes remained fixed on her hands. Hands that she rubbed carefully, washing them with her unspoken desire to be cleansed and freed from the bondage she was placed under. She spoke little, and that which she uttered was low, measured, and precise. I’d arranged to meet her in a café at a location neutral for the both of us, to lessen her worry that she’d be found out. “They call me dirty,” she said, stressing on the word she’d been tarred with. She didn’t look at me, and her gaze remained on her cleansing ritual.

Dirty. I can only imagine the number of times she had tossed that word in her mind, hoping for it to one day be eliminated from her psyche. Dirty. A word they had smeared every inch of her being with; a stained cloth they had wrapped her in; a label they had stamped all over her, for she is now amongst the untouchable amongst her people. And what was her crime? Innocence.

“They say I provoked him. I tell you, I did not!” I envisioned the surge of anger simmering within the walls of her arteries, threatening to be unleashed. She looked up and her eyes pulled mine into hers. They took me through her pain, her moments of despair and the times when she lost faith in her Creator and all of His creation. She had crashed with a greater force than she could ever have imagined, and it took several pillow-drenching years for her to begin collecting the shards of her broken soul.

Maryam* is from amongst the silenced sufferers who are afraid of speaking out, hoping to blend into the shadows of the world lest they be pointed out as ‘the dirty ones’. She was a seedling at 13 when she was raped by her uncle, multiple times – her garden of innocence completely robbed of its flowers – and she was 21 when she finally decided to stand up to her tormenting nightmares and told her mother.

The hysterics and tears of rage that streamed down her mother’s cheeks were not from the incredulous acts that her uncle had committed, but from the shame Maryam had brought to the family. Family honour, prestige and the aversion of being seen in a negative light were more valued than the sadness she was gagged with. Maryam spoke only to then be chastised, rebuked, and labelled as a temptress, despite her protests against her accusers. Now 31 years old, unmarried and still living with her parents, Maryam has lost all hope in ever having a mate that will soothe her soul, quell her fears and accept that she was the wronged and not the wrongdoer.

“I’m not dirty,” she told me, “they just can’t see past the stain he painted me with.”

Published in the September 2012 issue of SISTERS.