I’ll Believe It When I See It 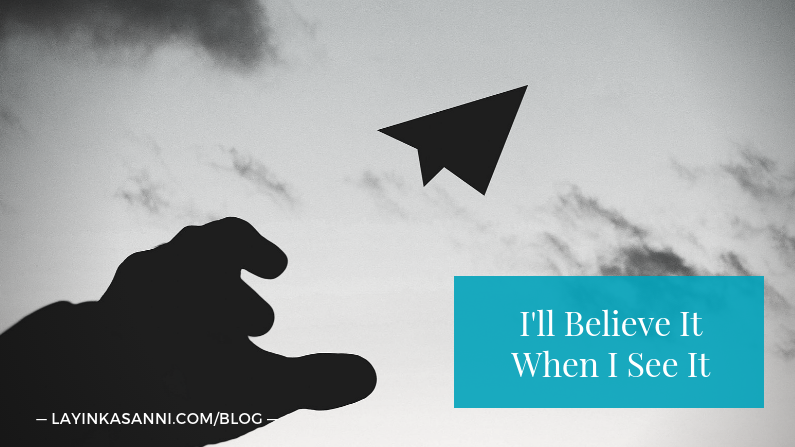 In today’s blog post, I’ll tell you a little about a woman who was so thoroughly disappointed with people in her life. You know that thing where people say they’ll do something, and they don’t do what they say they’d do, so much so that she adopted, and fully believed in the saying — ‘I’ll believe it when I see it.’

So whenever someone told her something, she’d find herself rolling her eyes, exhaling a little bit, and there’d be a voice in her mind, saying, “Whatever. I’ll believe it when I see it.”

You can imagine, this didn’t result in great connections with people in her life. And because she was so adamant that this mantra was truth, and she’d have to see something in order to believe it existed, she’d always wait for people to make the first move. She’d always be the one who’d wait for someone to ask the question first.

For instance, maybe her husband comes home, and if he doesn’t ask how her day was, then she doesn’t believe that he cared about her, or that he was thinking about her that day, because, “I’ll believe it when I see it, and if I don’t see that you’re asking me how I am, then I don’t believe that you care about how I am.”

She’d be the one who’d wait for people to be affectionate first, and she’d always do the waiting and blaming game, where if she didn’t see it, she wouldn’t believe it. This mantra was so ingrained in her that she completely and utterly saw it reflected in her life.

It exhausted and frustrated her because the longer she wanted to see it, the more she waited to see it, and the less faith she had in other people showing up for her, because that’s ultimately what she was waiting for: for people to show up for her. But the questions that come to mind for me are:

How much was she showing up for herself?
Was she even allowing herself to see it?
What about if she gave herself permission to flip the script and believe it first?

Can you imagine that powerful motion of flipping the script, and that shift that occurs, where:

She would think good of her children before they even showed it.
She would believe in the goodness of her other half before he expressed it.
She would wholeheartedly have the conviction that she’s capable of change before she even crafted her gameplan.

In choosing to believe it before she sees it, she then moves into a place where she’s empowered — where she can start to affect her circumstances, have the control, and start to influence the people around her.

So when her other half comes home, and she asks him about his day instead of expecting — maybe he could return the question, “So how’s yours?” And therefore, she’d see it, because she believed in the goodness within, and she showed up for herself first.

The truth of the matter is: Your mind creates the reality it wants to see. So even if you don’t believe it, how will you ever get to see it when it presents itself to you?

This is the final question I’d like to leave you with in considering the story of that woman who once believed that she had to see it before she believed it, and chose instead to embrace the new mantra: ‘I believe it, then I’ll see it.’

Have a wonderful week ahead, my lovely, and feel free to get in touch with me in the comments below if anything has come up for you in today’s post.