In Search of Me 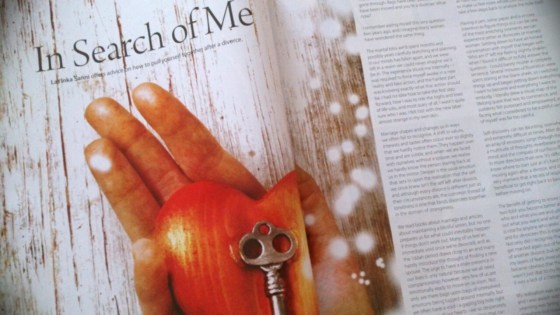 I was requested to add this article here, as many who read it in the June issue of SISTERS enjoyed it. Thank you for the love! — LY.

The talaq has been uttered; the khula’ has gone through. Bags have been packed, things have been moved, and you’re a divorcee. What now?

I remember asking myself this very question three years ago, and imagine many women have wondered the same thing. The marital bliss we’d spent months and possibly years carefully sketching and planning in our minds has fallen apart, and we are left in a realm we could never imagine we’d be in. The experience shook me internally – I was required to force myself awake in a new reality and take action, and the hardest part was knowing exactly what that action should be. I had no idea how to take the first step forward, how I was to ride the highs and lows of life solo, and most scary of all, I wasn’t quite sure who I was. I felt lost with the new label – almost strange in my own skin.

Marriage shapes and changes us in ways we often fail to recognise. A shift in values, interests and tastes often occur ever so slightly that we hardly notice them. They happen over time and are subtle, and when we are faced with ourselves without a spouse, we realise we hardly know the person staring back at us in the mirror. Despair is the usual emotion that sets in upon the realisation that the self we once knew isn’t the self left after divorce, and although every divorce is different just as their circumstances are, the common thread of loneliness is one that binds divorcees together in the domain of strangeness.

We read books about marriage, and articles about maintaining a blissful union, but no one prepares us for what could inevitably happen if things don’t work out. Many of us feel an immediate void once we’re divorced, and as the ‘iddah period draws close to an end many hastily introduce the thought of finding a new spouse. The urge to have a male presence in our lives is only natural because we all need companionship, however very few of us are emotionally ready to move on so soon. Not only are there bags upon bags of unresolved emotions being lugged around internally, but we often have a void – a gaping big hole right in the centre of our hearts – we so desperately want to fill, and it’s that desperation that can be dangerous. Our hearts might throb and yearn for love, care and affection, and those of us who are hopelessly romantic feel an emptiness that we go to great lengths to eliminate – some of us shop, some indulge excessively in food, and some shut people out or reintroduce people into our lives. We all have our own way of shovelling in things to make us feel more whole, but too few of us take a few steps back to analyse the hole itself.

Having a pen, some paper, and a sincere intention to figure things out can be one of the most enriching moments we can experience either as divorcees or married women. Settling down to have an honest conversation with myself that began with ‘who am I?’ left me feeling slightly shaken when I found it difficult to fully answer the question – I could barely muster a complete sentence. Several minutes of frustration were spent staring at the blank sheet, so I switched things up and began jotting down everything I want to become and everything I want to embody. I literally drew a visual map of the lifelong quest that was to commence, and suddenly felt purposed and empowered, as facing what I considered to be a pitiful version of myself was far too painful.

Self-discovery can be daunting, overwhelming and extremely difficult at times. After divorce, an array of emotions surge through the body, a multitude of thoughts reverberate in the mind, and the compass of our focus flicker in more directions than one. It’s difficult to know where to start just as it’s hard to get moving again after a divorce, and it’s at that very moment that a recess of respite is most beneficial to get right back to basics, especially before moving on.

The benefit of getting to know yourself is two-fold: you become better acquainted with who and what you are, and ultimately find out what you want and what’s missing. This is vital for anyone who seeks to get married, and for divorcees this is especially important. Not only did I recognise that I was terrified to get married again out of fear of the possibility of another divorce, but when I peeled off my layers of fears, insecurities, and doubts it became obvious that the real void in my life wasn’t just due to my longing for a life-partner, it was a lack of a connection to Allah.

My realisation was almost a lightbulb moment, and I was awash with emotion to think my yearning was being directed and projected elsewhere but towards Him. Wanting to love and be loved isn’t a fairy-tale notion, it’s real and perfectly normal, however knowing what void we want marriage to fill needs consideration and a sincere look at the heart.